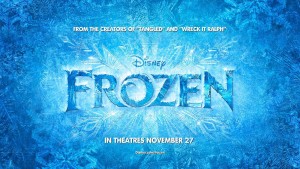 Most of my designs start when I get a random idea, but occasionally they occur as a reaction to an announcement. When I first read the announcement about the closure of the Maelstrom and the up coming Frozen ride, my mind immediately starting racing.

For me, the next step is to research.
For this project that meant watching Frozen far too many times. I have a new appreciation for any parents or child care professionals that had to go through this for the sake of their children. I wish I had access to a script for the movie. I also took a couple of looks through the the book, The Art of Frozen

. Most of the design I did for this ride was done before Disney released the Making of Frozen special. Any information about the writing and design process of the movie staff would have also been a great help.  I started to look at medieval Norwegian architecture but soon realized that the movie provided enough visual material for the ride as most of the movie took place in the wilderness or inside specific buildings.

Having watched the movie so many times I grew a strange attachment to it. Now, whenever I’m in Hollywood Studios (or whatever it will be called in the future), I end up going to the Frozen Sing-a-Long attraction and enjoying myself.

Since Disney announced this project,  it came with plenty of predefined limitations. The ride was going to be in the Norway pavilion of Epcot in the same building that previously housed Maelstrom. Through my research, I could find no mention or permits filed for building expansion; this told me that they were going to stick to a layout similar to Maelstrom’s. From the initial announcement it seemed obvious that Disney was going to abandon the history and culture of Norway and create a story attraction.  Classical Disney park ride design will sometimes stick closely to the movie while other times they just relate to part(s) of the movie.  Peter Pan, Snow White, and most recently Journey of the Little Mermaid are all examples of rides that attempt to re-tell the movie. I think this method of taking the rider through the movie would best be suited to this ride.