When I first heard of the Tron coaster I was a little worried because Disney has a long  standing rule that roller coaster tracks shouldn’t be visible and dominate the skylines. The first looks at the Tron Coaster design showed a traditional large steel coaster, however, which originally appeared like it might violate this Disney rule. Ultimately, I was happy to see in the announcement video that they found a way to cover the tracks without the appearance of a complete building.

I first heard mention of a Tron Coaster a few months ago. The initial talk was that it was going to be a traditional steel coaster. This worried me because it did not fit into the Disney method of coaster creation. Ever since the addition of the the Matterhorn in Disneyland, they have tried to hide the tracks of their rides as much as possible, from the public view.  Most rides since then were heavily themed as Mountain ranges.  Even Rock ‘n’ Roller Coaster got housed inside of an oddly shaped building. Since it was in the backstage area it was okay.   Hearing about this coaster made me wonder what they were going to do. A large building like Rock ‘n’ Rollers would not be visually appealing and just leaving the tracks bare is not Disney’s style. Thus, I was happy when I saw the Tommorowland at Shanghai Disney announcement video.

The enclosure was a wise idea. It covers the tracks but avoids a large building.  It almost invokes some of the architecture design from the Beijing Olympics, keeping with the host countries thoughts on futuristic design.  Though not visible in this video the ride’s cars are very well designed. There have been other motorcycle coasters before. The cars have traditionally required a back arm brace to keep riders  secure. This design seemed too lacking in theme for a Disney ride.  Yet the pod design of the Tron bikes  allow this brace to blend in perfectly. 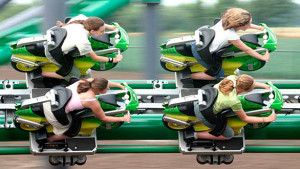 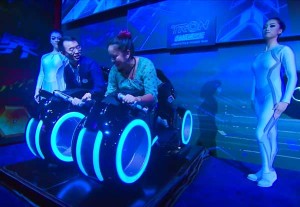 So why am I bringing this up? As has been mentioned on other blogs, there has been talk of a Speeder Bike Coaster coming to Hollywood Studios and this Tron ride could be similar to it. A new coaster in Hollywood studios would probably be housed in a building for weather reasons. The building would not be hard to hide behind something large and heavily themed such as an Indiana Jones attraction or Carsland. I think the Speeder Bikes would still be a little uncomfortable. They would have to be visually altered because speeder bikes have such a long nose and lack structure to blend the back brace. This is a tricky challenge but I’m sure Disney can find a way. 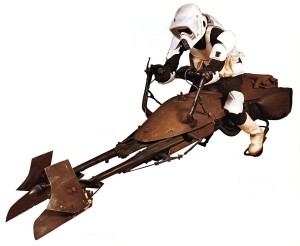