As mentioned in my previous Hollywood Studios post, let me go over what I think would be a good plan of attack for the upcoming expansion. Disney will not close the park regardless of how much construction is going on; hey they made it work in California Adventure. Many think, and it’s very believable, that they will do the entire expansion at once. The park is considered by many as just Tower of Tower, Rock ‘n’ Roller, Star Tours, Toy Story Mania and the rest of the attractions are considered time killers. A lot of visitors would not even notice if the most of the park was blocked off. While this may be true I think that doing it in phases would improve the guest experience. 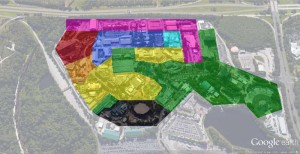 So here is how I think the construction phase should go. The green areas will remained unchanged until all construction the “expansions” are finished. Once they are finished and if Disney sees that they are drawing in significant crowds they might update the look of the entrance street, like they did in California Adventure.  The area around Tower of Terror I don’t expect to change much.

This phase has already started happening, its taking place in the dark blue area. This space is separated from guests already, so it is a great place to start. Due to its proximity to Toy Story Mania  this will most logically become the Pixarland.  The Pixar area will probably be home to 1 or 2 Dark rides and other kid friendly attractions based on Pixar’s (not Cars) movies. The light blue area is the office buildings that are attached to the old Disney animation departments. I am unsure what level of use these buildings are getting and if Disney has any desire to keep them. They could stay or go.

Once D23 happens and Disney officially announces the changes to Hollywood Studios I think construction will expand to the red and orange areas. The Red area is where most expect a version of Carsland to go. Lights, Motors, Action has long been rumored to be an expensive attraction for Disney to run and if that is true they will not mind it closing as soon as possible.  Another bonus of doing this phased is that the Street of New York could stay open for entertainment and traffic purposes. Just create a some false fronts to block at the end and the side street and you separate the guest from the construction effectively and without succumbing to the walls that have visually infected all the other parks. .

As for the orange area, now that Frozen has moved theaters there is no reason to keep that theater accessible so it can go with LMA. The reason I put it as a different  color is I actually think that this area might become a Star Wars attraction. I can envision a good transition from Carsland to a Tatooine, or other alien landscape, through the use of a stone arch. While building Pixarland without inconveniencing guest will be easy, doing Star Wars is going to be a little tricky. As shown on the map Star Tours is surrounded by other attractions not just back stage areas. Doing construction in the yellow areas is going to be more of an inconvenience for guests. Disney probably want some Star Wars improvements to release with the movies, but I think they might be happy with just Star Tours and a new Jedi Academy taking up residence in the Sounds Dangerous theater for Phase 1. Why do I say this? Simple, because I think Disney might have to take care of some outside park construction before they start certain areas in the park.

One part of the park that many overlook that is going to have to be addressed with this expansion is the parking lot. Hollywood Studios has one of the most troublesome parking lots. Two entrances, relatively small and bad traffic flow. Additionally with all the attractions they plan to put in attendance would raise, meaning a need for more parking. All this means that some parking changes are needed. The closure of so many attractions should drive down attendance and this would be Disney’s best chance to tackle the parking lot. This would be the final part of my Phase 1 planning. First step would be redirecting the small waterway that arcs along Hollywood Studios southeast side if needed. Next move S Studio Drive to  allow for a southern addition to the parking lots.  Also improve this entrance, for being considered the main entrance it’s pretty bland. The moving of S Studio Dr will also provide more room behind Star Tours  and LMA, which could be used for  backstage areas or perhaps a thrill attraction.

Once all those were nearing completion then they would need to start on Phase 2, which would a bulk of the Lucas attractions. As mentioned before if the south entrance road is moved then this provides plenty of ground for a new attraction to be built. Most of the buildings  in the yellow areas will probably be gutted and then have something else put inside. With the exception of the Muppets area which I think will probably be taken over by Star Wars. I can see Muppets moving and taking over the One Man’s Dream/Captain Sparrow building during Phase 1. Thus when phase 1 opened you have a new Muppet attraction ready so the pain of losing the old one is lessened. Muppets would also fit in well between Playhouse Disney and Pixar.  I’m not sure how much of an face lift any of these buildings will be getting.  There has been much talk about Echo Lake turning into Degobah swamp but I can’t see that happening. While they could remove the dinosaur and ship  making it into a swamp would be visually jarring from some of the surrounding areas. Imagine coming out of Hollywood and Vine or 50’s Prime Time and seeing a swamp, people would think they are at the Blue Bayou. So I think it and the two theaters will stay more Golden Age Hollywood themed for now.

That finally brings us to the dark area, Indiana Jones Stunt Show and Backlot Express dining. This could be closed at any time since it’s off in its own little corner (where it belongs).  I think when it closes depends on the operating costs of the attraction. It is a good way to entertain a large group but does management think is it worth the cost of all the stuntmen they employ (I feel sorry for these guys). If Disney is smart this area will not be Star Wars but instead will be a new Indiana Jones attraction.

My next Hollywood Studios post will be about my suggestions for new attractions.